Several years ago, I found myself in the local emergency room suffering from what turned out to be a kidney stone attack. In the process of scanning me for kidney stones, they also discovered gallstones. Because the gallstones weren’t causing me any problems at the time, I was advised to just leave them alone as long as they weren’t bothering me.  So I left them alone and passed my kidney stone after a few days of misery.

In early September of this year, one morning as I was getting ready for work, I experienced some severe stomach pain and difficulty breathing. If it wasn’t for a court appearance scheduled for later that morning, I would have gone to the ER.  But I decided to try to ride it out.  Coincidentally (as if there really was such a thing as coincidences) my pain subsided 15 minutes before my court hearing. The appearance was short and sweet and I was back at my office in half an hour.  Within five minutes of my return, the stomach discomfort rose up again.  By lunchtime, I was resting back at home scheduling an appointment with my family doctor for the next day. When I woke up mid-afternoon after a short nap, the pain was gone and I truly felt good as new.

I kept my appointment even though I wasn’t in any discomfort.  Some poking and prodding didn’t reveal any issues, but blood work results with elevated liver enzymes and an ultrasound confirmed that I was having gallbladder issues and my doctor decided to refer me to a surgeon. Unfortunately, the surgeon’s schedule wouldn’t allow my visit until early October.  I did tell my doctor that if I needed to have any procedures done, that I would like to get something scheduled before the end of the year since everything should be covered 100% after meeting my insurance deductible with the sleep apnea testing.

Aside from the initial attack and a very severe case of nausea the following week, I really only experienced irregular onset of stomach pain and discomfort.  It was difficult at times, but still manageable for the most part.  In fact, I was still able (most of the time) to continue visiting Cedar Point and riding rides with my daughter.

Every year in late October, my sister-in-law hosts a Hallowine party at her home outside of Cincinnati. We weren’t committed to going this year, but with our daughter’s new-found love of roller coasters coupled with the fact that our Cedar Point passes also allowed us free entry into Kings Island, we were really hoping to make a trip down there this year to spend an evening at that park.  Assuming that my surgery would be scheduled around mid October, we arranged for an early October visit a few weeks before the Hallowine party, when both of our daughters could go.  Our 24 year old had decided over the summer to transplant herself to Florida when her apartment lease was up in November, so this became a last hurrah outing for the entire family before her departure.

Between a cold and rainy Friday and Saturday, we managed to ride most of the rides at Kings Island and I only had mild discomfort driving.  I then met with the surgeon the following week and he scheduled my surgery for November 4th — not as quick as I had hoped, but on the bright side, this allowed us to visit Cedar Point a few more times before they closed for the season and it also gave us the opportunity to return to southwestern Ohio for the Hallowine weekend and another night at Kings Island the weekend of October 20th.

It really was a special time as my wife’s oldest sister celebrated a milestone birthday and four of the five sisters were able to be there together to celebrate with her.  Spread across the country, it is very rare for all five to be in the same place at the same time, so taking liberties to paraphrase Meatloaf four out of five ain’t bad.

Over the weekend of our second Kings Island visit, my wife received news that our friend, Sue, back in Sandusky, had fallen and broke her leg. Sue was another of my wife’s bible study members — I blogged about their group leader, Betty, a few years back. Upon further examination, Sue’s doctors discovered that it happened the other way around. Unbeknownst to Sue, her bones were full of cancer and her leg broke as she was walking causing her to fall.  It was then that her doctors also discovered spots on her lungs and other organs and she was given a diagnosis of stage four cancer.

My gallbladder removal surgery on November 4th was supposed to be done laparoscopically and as an out-patient basis.  But when my surgeon went in with the scope (as I understand it) a rather large gallstone was right up against the bile duct and blocked his view/access, so he had to open up a full incision to remove my gallbladder.  Still under from the anesthetic I wasn’t aware of it yet, but my out-patient procedure had turned into a hospital stay of a few days.

I was pretty groggy coming out of recovery as they wheeled my bed up to a room. My wife tried to explain to me what happened and that I would be staying in the hospital for a few days. I recall trying pretty hard to comprehend her at the time, but I was still pretty loopy from the anesthesia. My extended stay gave my wife the opportunity to visit Sue for a short time that evening. Given how she feels about being in hospitals, she probably would not have had a chance to visit Sue had I been sent home the same day as originally planned.  I asked her to send my positive thoughts to Sue and offered up (Sue was in a room one floor above mine) a prayer or two as I drifted in and out of conscious thought.

I was going to visit Sue myself once I became mobile, but upon my discharge from the hospital on Friday I was not able to go up to see her. My mobility was still quite limited that first week home as I was still under the influence of pain medication and unable to get back over to the hospital.  Sue died on the following Saturday.

I started back to work for half days on the Monday after Sue passed.  On Wednesday, I had a two week followup visit with my surgeon and had my staples removed two hours before Sue’s calling hours at the funeral home.  On the Thursday a week before Thanksgiving, I took the morning off to attend Sue’s funeral with my wife. This was the first funeral I’d experienced since my father’s 9 months before and the emotion of it caught me a bit off guard.

Five different priests (presently or formerly assigned to our parish) celebrated Sue’s life.  I cannot remember ever seeing that many priests celebrate a funeral of a lay person. It was clear that these priests were there, not because they were Sue’s current and former pastors, but because Sue was their friend.

It was our former pastor Fr. Frank who eulogized Sue with his homily. He mentioned how thankful he was to have had the chance to visit with Sue a few different times while she was in the hospital and to talk to her about the trials she was going through.  Among many other things, he talked about Sue’s faith and prayer life. He talked about her acceptance of the illness that took her so quickly upon its first diagnosis. He talked about meeting with her family after her death and their discussions about Sue’s prayer notebook where she wrote all of the special intentions that she prayed for every single morning.  Fr. Frank’s homily caused me to take an introspective look at my own personal prayer life and how lacking it has become when compared to what it could or should be.  I realized at that moment how far short I am falling — letting other distractions keep me from achieving the personal prayer life that God calls each one of us to.

After Sue’s funeral, the parish had a luncheon for Sue’s family and friends.  I had the opportunity to briefly speak with our two prior Pastors, Fr. Frank and Fr. Marty.  By this time — two full weeks after surgery — I was walking about freely with very little discomfort and without my protection pillow. So I was a little bit surprised when Frank asked me if I had had surgery recently. I explained to him what happened and the coincidence that I was in the same hospital at the same time as Sue for a couple of days during my recovery. That was when Fr. Frank said that it was Sue who told him during one of his visits that I’d had some surgery and had been in the hospital. Even in her final life struggles, she still was not solely focused on her own suffering.

Just over a month ago, Sue had no idea what she was in for and was probably starting to plan how she would celebrate Thanksgiving with her family.  In just a few weeks’ time, Sue was no longer with us.  Life is short.  We never truly know how much time we have left.

I did my half day at work last Thursday in the afternoon after Sue’s funeral. I prepared a document which I needed to file in the local municipal court — which requires a short 5 minute drive from my office.  I considered taking it at 1:00 when it was initially ready, but I had another client appointment scheduled for 2:00 which still required some additional preparation from me.  I decided to wait.  I considered taking it at 2:45 when my client meeting was finished, but a question from a co-worker and the resulting discussion delayed that decision.  I later glanced up at the clock and realized at 3:15 that my time was running out to get to the courthouse before its 4:00 closing.  As I hopped into my car for the short drive, my radio was already tuned in to Annunciation Radio.  While stopped at a traffic light, I heard a quote/question which I believe was closely tied to (and just may have come from) Sue. I wasn’t initially listening all that closely, so I missed the context of the story, but believe the station host was speaking with a priest from the Diocese of Toledo.  He may have been talking about getting a point across to school children, but it really was a universal point which further drove home the message to me earlier in the day.

I may be paraphrasing slightly, but the gist is the same:  “What would you do if you woke up today with only the things you thanked God for yesterday?”

Is there a more powerful illustration of how important it is for us to make daily prayer a central focus in our lives?  Is there a stronger statement than this to demonstrate how easy it can be for us to take for granted the things and people we hold dear?

The following Monday before Thanksgiving, I had a parish committee meeting for the social concerns ministry that I am involved with.  One of the committee members made Christmas CDs for everyone and our parish staff member on the team gave some appreciation gifts to everyone.  They were wrapped and I do not know if they were different items for different members, but when I opened mine up at home, I saw this: 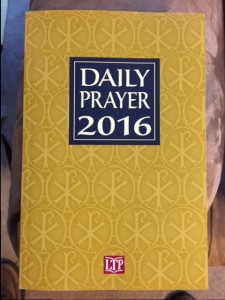