I’ve never been in top physical condition and have had my share of minor issues over the years, but I try to stay active and I thank God as often as I can for the blessing of good health which I have had in general.  I did not visit the doctor very often or regularly after high school.  I felt okay and rarely had any problems, so I figured it wasn’t really all that necessary.  For a number of years after college I didn’t have any health insurance.  I worked in a small office which didn’t offer any employee coverage.  When I did finally wise up and got an individual policy, it wasn’t the best, but it was there in the event of a catastrophe.

After I met my wife, but before we were married and not yet covered under her insurance, she talked me into going in for a check-up.  By this time, I was well settled into a desk job and had added a few pounds onto my old high school weight.  The doctor let me know that my blood pressure was a little high and he eventually put me onto a prescription to control it.  That was over ten years ago and I am still taking blood pressure medicine and in a constant battle with the bulging waistline, but both have remained under relative control.

In May of this year, my blood pressure prescription needed refilled. When we called it in to the doctor’s office, they reported that the doctor needed to see me for a visit before he could refill the prescription. As part of that routine visit, he ordered blood lab work which disclosed a few elevated levels which warranted a follow-up visit.  Two of those results had simple fixes that I won’t get into, but a third result gave him a bit more concern and he referred me to a hematologist to determine why my red blood cell count was abnormally high (the technical term for it that I learned that day = polycythemia).

In June, I saw the hematologist and she laid out all of the possibilities (some of which were a bit scary), but I had done a little bit of research on my own and gave her my “suspicions” that I might be suffering from sleep apnea.  Although not a definitive sign of sleep apnea on its own, I’ve always been a shoe-in finalist if anyone ever came up with a snoring contest. My mom had been bugging me for years to go and get tested, but it is just so darn expensive.  Even with better insurance coverage (which has gotten progressively worse each year) through my wife’s employer, I always was reluctant to make the call.

Now that decision was no longer mine to make.  It turns out that a sleep study is one of the standard tests ordered when trying to diagnose the cause of polycythemia.  After ruling out a few other possible causes through more specific blood tests, I was on to my third doctor specializing in sleep disorders.  I was scheduled for an overnight sleep study in July to determine whether I have sleep apnea.  The morning after my procedure, the technician advised me to buy flowers and chocolate on my way home to give to my wife based upon the snoring she observed that night!

I got confirmation a few weeks later of the diagnosis.  I was scheduled for a second sleep test with a CPAP machine to determine the pressure levels necessary to keep my airways open at night.  The procedure wasn’t completely foreign to me.  My dad was diagnosed with sleep apnea several years before he died and he used a CPAP machine every night himself up until his final illness.  So I went back again in August for the second study.

After the second study, I was given a few different options of medical equipment suppliers to secure my CPAP machine, mask, and accessories.  I made an appointment with one of them.  Because of the way our health insurance works, I qualified to get a CPAP machine for free once I met my deductible for the year.  Thanks to two separate sleep studies, that wasn’t going to be a problem, but because they were a bit slow in actually processing the billing, I was not yet officially qualified when I had my appointment with the medical equipment rep.

I knew I was going to surpass my deductible, but I also knew I wouldn’t get reimbursed if I paid out of pocket for a new CPAP machine if that transaction happened first.  Instead, it would just decrease the amount I owed to the sleep doctor and technicians.  I knew that I could make payment arrangements on the doctor bills, but that I could not take possession of my CPAP machine unless it was paid in full up front.

So I found myself in a quandary. I wanted to start the CPAP treatment as soon as possible to give it enough time to start regulating my apnea before my scheduled followup visit with the hematologist.  I figured the less time spent on the machine, the less chance it would have to affect my polycythemia before my visit.

The ultimate solution came when I called my mom and asked her if there was any chance that she still had Pop’s old CPAP machine.  I knew she had gotten rid of most of his medical equipment after he died, but it turned out that the one device she still had packed away in the closet was his CPAP machine.  Actually what he had was a BiPAP machine, but when I met with the medical equipment technician, she said that she could adjust the settings on it so that it acted as a CPAP instead of a BiPAP.

It was only a couple of weeks before the sleep study billing came through and I was able to return and claim my [free] CPAP machine.  It was only a couple of weeks that I used my dad’s old machine to transition over to my new sleeping procedure.  Of course, if dad was still alive at that time, that wouldn’t have been an option for me and I would have had to wait.  It wasn’t anything life threatening or critical, but it still was a helpful gesture from my dad from the grave.  By the time I went back to the hematologist in early October, my blood count had come back closer to the normal range.

Right up until the very end of his life, the first thing Pop always wanted to know when I saw or talked to him was “How are YOU doing?”  The last time that I spoke with him (over the telephone) where he was able to vocally respond to me, he asked me how I was doing.  I like to imagine what his reaction in Heaven must have been to see me using his machine to help keep me breathing at night — even if it was just for a few days until I could get a machine of my own. I am thankful that my mom kept his machine and that he was able to share it with me even after he was no longer here with me. 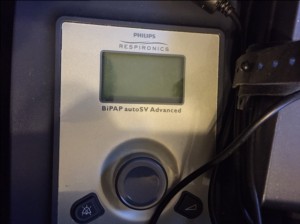 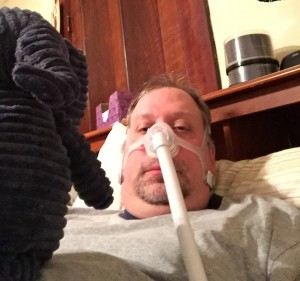 One thought on “See Pop, CPAP”