I have what many would consider the luxury of working in an office only ½ mile from my house. That makes my daily commute about 3 minutes by car on a bad day. But in the summertime it often means a leisurely ten minute walk. With the uncharacteristic early spring weather we’ve had in March and the recent spike in gas prices, I’ve been contemplating an early start to my annual transition from car tires on the street to shoe soles on the sidewalk. The threat of rain and the few days where I’ve had appointments or appearances away from the office outside a reasonable walking distance have kept me from making that transportation transition until today.

Walking is often a spiritual experience for me. Rushing off in the car to get to work or school, or to the bank and post office, or any other errand is often so hectic and stressful. When I take the time to slow down and walk somewhere — as compared to the regular rat race rut — a peaceful calm feeling is profoundly evident. Driving the final three blocks of my morning commute to work, I rarely see much other than the two traffic lights and the flashing SCHOOL 20 MPH sign before turning into the driveway to my office. But in walking those final three blocks, I see and smell the trees and flowers; I see and smell newly applied mulch to a front garden; I see evidence of squirrel activity in the buckeye trees; I see individual house numbers; I hear dogs barking and children laughing as I walk past a school playground or two.

When I commute to work on foot, I sometimes pop in earbuds and listen to some music or listen to a short news report podcast. Other times, I leave my ears naked to the world and its natural noises. But naked ears or not, the morning foot commute is always a time for me and my thoughts to get reacquainted. This morning was no different.

The past week has been rife with such occurrences for me. The City of Sandusky is remembering the loss of police officer Andrew Dunn who was violently taken away from his wife and young boys one year ago on March 19, 2011. As you would expect, and justifiably so — the first anniversary of such a tragic event brought forth a number of reflections in local news media and brought the tragedy back to the forefront in the minds of those who do not live with the tragedy every single day.

In addition to the first anniversary of Andy’s death, I’ve seen what seems like an unusual number of “deaths once removed” for lack of a better phrase over the span of about 4 days.

On March 16th, Leo Buffone, the 96 year old father of my former co-worker in college passed away. I did not know him, but his daughter was similar to a second mom in the workplace during my first real job. Fifteen years after I left that job, I still get a birthday card from her almost every year in the mail.

On March 17th, Michael Leoni, the eldest son of my parents’ next door neighbor to the north passed away from cancer. His own father died from cancer nearly 20 years ago — not long after my dad’s own throat cancer scare.

On March 18th, Jack Jenkins, the son-in-law of my parents’ former next door neighbors to the south passed away. When my dad was laid off from his job in the early 80’s, our neighbor pulled some strings and got my dad a part time job delivering fish takeout at Jack’s restaurant. I also started out in the cub scouts with Jack’s son Todd — with his wife Dotty as our den mother.

March 18th and March 19th took Eugene Garay and Donald Sinclair, respectively. The fathers of two of my high school classmates. I didn’t know either of these men and have not spoken to the children they left behind in years. But through the wonders of Facebook, I still see from time to time the things going on in their lives that they feel are worthy enough to share — even if not directly — with me.

On March 19th, a good friend Betty Kurtz left us. I first met Betty in the spring of 2001 when a parish retreat at Sts. Peter & Paul arbitrarily (but not by mere coincidence) put us together at the same table for a weekend. We shared a few faith stories and experiences that weekend and a lot of hugs. A few years later, when I began dating my wife (who I met through another parish retreat), I learned that she was in a weekly bible study group that met at Betty’s house. Betty belonged to a different Sandusky parish, so we did not see her regularly at weekend Mass, but we each had the opportunity to share with her in different ways.

When Linda and I got married, it was Betty who sewed together the black elastic garter and stitched on the gold STEELERS lettering that Linda wore for me to find during that wedding reception ritual.

<IMAGE PLACEHOLDER> (I have a photo of the garter, but can’t find it at the moment)

After a long illness took Betty away from her house for various surgeries and recoveries, she finally returned home earlier this month and seemed well on her way to recovery. That recovery came to a sudden end late Sunday evening and she went to her eternal home early Monday morning. Tuesday evening, as Linda and I contemplated our schedules for the rest of this week, we decided to skip our weekly Lenten ritual of Wednesday evening soup and prayer at our church to make sure that we were able to attend Betty’s calling hours at the funeral home without feeling rushed trying to do both.

We then prayed a rosary together for Betty. Although we regularly attend weekend Mass and are both involved in different parish ministries throughout the week, regular praying of the rosary has not been something we have done together. Through my recent regular listening to Annunciation Radio, I discovered the daily evening broadcast of The Rosary is a Place which is a fantastic way to get back in the practice when you’ve fallen away from the devotion of praying the rosary.

So this morning, I had a number of people to reflect upon during my foot commute to the office. That didn’t consciously factor in to my decision to walk to work today for the first time this year, but it did give me more of an opportunity to reflect.

If you’ve read the old posts in the blog, maybe you recall Pennies from Heaven. It may just be superstition — call it what you will. But today, about 2 or 3 minutes into my walk I spied a penny about a dozen feet ahead of me at the intersection of the sidewalk and a driveway. Naturally, I stopped to pick it up. After examining it, I discovered that it was a Canadian penny. Was it just coincidence for me to find a penny with an Elizabeth on the face? 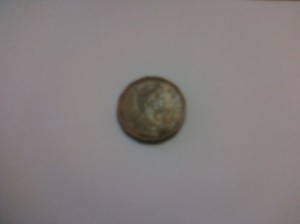 Betty, if you can hear me: Message received!

Julie; Anna Marie; Jean & Karen; Dotty & Todd; Steve & Jamie; Amy: I can’t remember the last time I talked to any of you in person and don’t even know where some of you are at these days. But let me take a moment now to remind you [and all others in your families, as well as ANYONE else who has ever lost a close loved one]: Don’t forget to look all around you every day for signs from and reminders of your recently passed loved ones. They are there. Maybe you don’t believe in the idea of pennies from heaven, but I believe it was no coincidence I found the penny that I did this morning. It was finding that particular penny that inspired me to write these thoughts today.

Maybe you aren’t looking for pennies.  Maybe instead you are called to watch for the smile or unique expression on the face of your child, grandchild, or niece/nephew that gives you a quick flash of your lost loved one. Maybe it is a favorite saying or phrase that they often used in life that you hear repeated by a stranger, or a favorite story or joke being retold again. Maybe it is a familiar smell or sound that triggers a memory from long ago that you shared from that special someone now passed on.  Don’t fall into the trap of mis-labeling those moments of recognition as mere coincidences.  There ARE NO coincidences with God!

A friend from my college days writes and sings some of the most beautiful Christian music you will ever have the chance to hear. In writing this post, I am reminded of his song We’ll be Together Again. You can read the lyrics here, and although I am not certain, I believe you can buy the individual song here at iTunes.  Take a listen and take it to heart.

They all live on in each one of us!

5 thoughts on “Pennies from Heaven (revisited)”