Our daughter celebrated the Sacraments of First Reconciliation and First Holy Eucharist this year. Because of schedules and commitments, many of her out of town aunts and uncles were unable to celebrate with us, but they were all with her in spirit.  One other notable absentee was her Poppa who died just over two months before her First Communion celebration.  Through this entire year of preparation for these Sacraments, my wife and I had been concerned that my parents would be unable to travel and attend due to my father’s illness and frail state of health. Mom could have put Poppa into a care facility for the weekend and come by herself, but that would have really been hard on both of them. As it ultimately turned out, that decision did not have to be made.

Over the past two months I’ve had a number of people express sympathy to me for my father’s passing.  Anyone who has lost a parent or close family member can relate to my appreciation for those expressions of sympathy.  But one common phrase I’ve used in response to everyone’s condolences is that even though it is sad to realize that he is gone on earth, “his passing is much more relief than grief.”

I’ll never forget the words my sister said to me when Dad was preparing to come home from the hospital and transition to home hospice care.  She said, with all the love in the world, “I hope he goes fast.”  I think the reason that her words struck me so hard is because she was already in a place or frame of mind where I wasn’t at yet myself….  I was able to pray in general for God’s will and that I be accepting of that will, but I wasn’t able to ask for a quick transition to the next life stage.

We all deal with death of a loved one in our own way and I am at peace.  As the saying goes, “Life Goes On” and my life has gone on in the weeks after we buried Poppa, but not without a few reminders from him Popping in now and then.

Just to name a few:

* I have found a plethora of pennies and nickels in odd locations and in spots right next to my car when I park at the grocery store or Target — often in the parking spaces far away from the store where there is less likelihood of the more regular foot traffic.  This has happened so much more often over the past two months than I ever remember before — so often that I haven’t/couldn’t keep track of the circumstances of each find.

* In the week or two after the funeral, my niece randomly selected a library book from school about a classical music composer/piece that my dad used to play for her mom when she was a little girl. My sister had never shared those details with her daughter before the day she brought home the library book.

So to bring things full circle… When the time came for my daughter to celebrate her First Communion earlier this month, we no longer had to worry about whether her grandparents would be here or not.  Grandma didn’t have to worry about whether she would need to put Poppa into a care facility and Poppa wouldn’t have to feel like he was being left out.  And in the midst of other last minute roadblocks in the planning and preparation (Grandma’s car transmission deciding to go out mere days before her travels to be with us for First Communion), we received one of the biggest reminders from Poppa that he is still with us.

Buried in a nightstand in her bedroom, just days before she was supposed to come up for First Communion, my mom found the zippered book cover below containing a prayer book with a small children’s rosary inside a snap pocket also tucked in the zippered cover. She said that in the 47+ years that she and Dad were married, she did not know that he still had this. 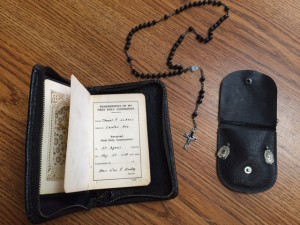 REMEMBRANCE OF MY FIRST HOLY COMMUNION 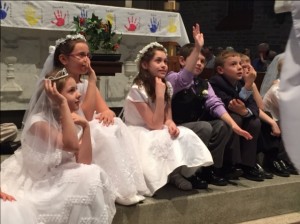 Could that have just been a coincidence that these items from Poppa’s First Communion remained hidden from the rest of us for almost 75 years, and yet my mom found them mere days before Poppa’s youngest grandchild received the Body and Blood of Christ for the first time?  Yeah, right…

One thought on “Communion Communication “Coincidence””