We rescued Shadow in March of 2010 from an animal shelter in Pennsylvania.  It had been nearly four years since we lost Abigail and that had been the longest I have ever lived without a furry friend in the house.  We had to put Abigail down when my wife was pregnant with our younger daughter after discovering that Abigail had stomach cancer.

We finally decided it was a good time to introduce a pet to our daughter when she was 3½ years old. Shadow was a perfect fit = friendly, affectionate and so very tolerant of children.  Abigail had been the polar opposite.  Living alone with me for a dozen years, Abigail was very close to me, but she was very intolerant of children and not overly sociable with other people in general.  We decided that when she passed it may have been a timely blessing with a new baby on the way.

A few months after Shadow came into our lives, we decided she needed a sister to keep her company during the day.  Beanie came to us from the same animal shelter in May. Not long after Beanie arrived, the two cats decided between themselves that I belonged to Shadow and my wife belonged to Beanie.

Beanie was always the sick one. She’s had breathing issues from day one which we believe to be asthma. Beanie has been on breathing medicine for most of her life.  She even has an asthma inhaler with a breathing mask that my wife must administer regularly. When it is medicine time, she jumps up on my wife’s lap and lets her place the mask over her nose and mouth because she knows that she will get a treat afterward!

The vet advised us that Beanie was not likely to live as long as the average feline, so we have always been prepared for her to leave us when the time comes.

Between the two, Shadow has always been the graceful kitty, while Beanie has always been the clumsy kitty.  Shadow could leap from the floor to the highest point in the room with ease, while Beanie could mis-judge the simplest jump from the floor to a chair.  Beanie often makes us laugh at her comic pratfalls.  Until we added a stand close by, Beanie could never make it onto the window sill in the front room of our house — a vantage point that Shadow claimed as her own.  We often saw Shadow sitting in that window when arriving at or leaving our house.  A tall rose bush sits right outside that window in the shade of a Magnolia tree.

Beanie was always the greedy one when it came to feeding time, often pushing Shadow out of the way to eat even though there were two food dishes and plenty of food and space for them both.  Beanie often finished up what Shadow left behind after she got her fill.  That is probably why we did not notice right away when Shadow stopped eating. 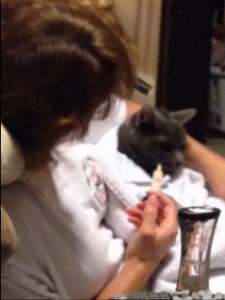 Shadow’s dark coat visually masked the weight loss, and it was not until it was too late that I picked her up one day during the last week of July and was shocked at how light she had become.  We took her to the vet right away and we tried a number of things, but blood work indicated that she had fatty liver disease and they also noted that she was severely jaundiced. They could not tell if the liver issue was the CAUSE of her lack of appetite or the RESULT of her not eating. We tried alternate foods and spent over a week force feeding her food and water at regular intervals through the day AND night — all of which she lovingly accepted without a tremendous fuss.

Her dehydration was such that we had to give her daily injections of fluid under the back of her neck.  She was less tolerant of those, but we were generally successful.  However, the time came late in the evening on Saturday the 16th when we were unable to get her to hold still for the insertion (it was a pretty big needle!) and we had to drive her 40 miles late at night to an emergency pet clinic to make sure she got her fluids that weekend.

We had been hoping that the regular feedings and fluids would eventually make her feel better and she would begin eating voluntarily on her own once again — and on a few occasions, she did.  This video is from August 13, 2014.

Our local vet suggested that we try that for a time before subjecting her to additional diagnostics and the drastic step of inserting a feeding tube — very similar to what my father had I suppose (also an expense we wanted to avoid if possible).  The emergency center advised that they should keep her overnight for observation.  Because of the difficulty we had that night giving her IV fluid ourselves and the disruption her nighttime feedings had on our sleep patterns, we made the difficult decision to have them put in the feeding tube.  They would perform an ultrasound the next morning when the doctor came in and have the feeding tube procedure done as well.

The following morning we got the phone call that the ultrasound disclosed a mass which was affecting her digestion and that the feeding tube would not likely resolve that.  After making a difficult decision, Shadow was euthanized within a few minutes of ending that phone call.  I went back to claim Shadow’s body on the 20th of August and we buried her the following day next to Abigail at a friend’s house. 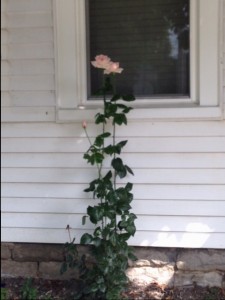 I took this photo of Shadow’s rose bush on August 23rd.  The roses which only just bloomed that morning were perfectly framed within her most favorite window.  Perhaps Shadow had something to do with the timing of these roses?

One thought on “Shadow’s Roses”