My seven year old and I have grown accustomed to walking to school every morning.  It’s just about one half mile from our front door to the school, so it’s only a 10-15 minute walk.  Her class starts at about 7:40 a.m., but we generally leave pretty early so that I can get back home and get myself ready for work after everyone else is already gone.  So we usually leave home a few minutes after 7:00.   When I was in the first grade, school started at 9:00 and ended at 3:00.  I rode the bus to school, which was an experience in its own right, but I was always jealous of the kids in elementary school who lived close enough to walk to school.  These father/daughter walks to school will be something I will cherish in my later years I am certain.

I usually carry my cell phone with me when we walk to school and use the pedometer app to track my walking distance.  I bring along my earbuds and pop them in on the walk back home to catch up on the news or to listen to one of many different podcasts I subscribe to.  Even though we don’t always talk while we walk, I make it a priority to not listen to any sound bites on the way to school in case my daughter decides she has something insightful to say, or just wants to be a chatterbox with nothing particularly “urgent” to say.

Leaving at 7:00 in the morning, it was always still pretty dark as we walked to school those first few months.  But with the return to Standard Time a week ago, it was finally sunny and bright for our morning walks to school last week.

As is sometimes the case, I had a pretty hectic few weeks in store for me at work.  As is true for most of us, sometimes the anticipation of hectic work week on a Monday morning can be a bit stressful for me.  Because my office is just a block away from my daughter’s school, I was thinking to myself that maybe I should just get ready for work early and go into the office directly from walking her to school to get an early start.  But as I got my daughter ready for school Monday morning, I argued with myself that I didn’t want to go into work early.  There were a few tasks on my phone that I wanted to accomplish that morning and a short podcast or two that I had been listening to over the weekend that I wanted to catch up on along with a few other short tasks around the house that I wanted to accomplish.

I talked myself out of going to work early and into the possibility of staying late (even though I am generally much sharper at 6:00 a.m. than at 6:00 p.m.)  I talked myself into listening to the interesting podcast I’d started but hadn’t yet finished.  That decision didn’t relieve my work stress at all, but I made the decision nonetheless.  As I continued to stress out about the week to come and the selfish reasons why I wanted to wait and go to work at my typical hour, the thought popped into my head that I had not been listening to Annunciation Radio much recently.  Through a good bit of the summer, I had fallen into a pattern of listening to Pittsburgh sports talk radio with the resurgence of my beloved Bucs on the baseball diamond.  When the baseball post season ended, I found myself listening again to an old favorite Wills and Snyder in the Morning on AM talk radio.

As my daughter and I walked to school that Monday morning, in full daylight, I continued to debate with myself what audio, if any, I would listen to on the walk back home and while getting ready for the work day to begin.  About two blocks before we got to school, we passed a white Cadillac in a driveway and this is what we saw: 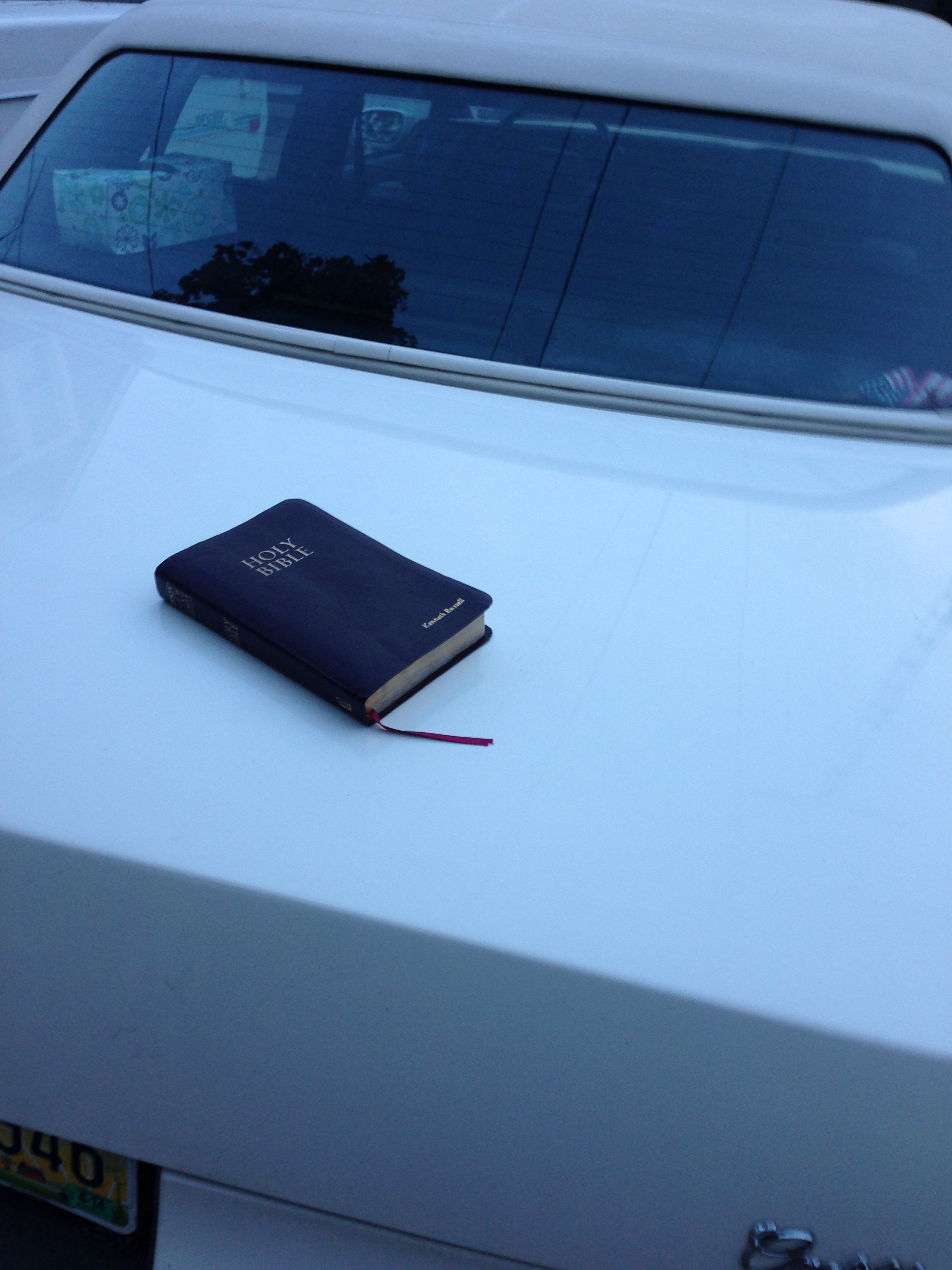 I took the hint.  I did not go into work early that morning, but I found myself listening to Annunciation Radio on the way back home and throughout the morning as I got ready for work — and throughout the week.  On Tuesday morning, the car was still in the same driveway, but the bible was gone.  That was when I first noticed the license plate: 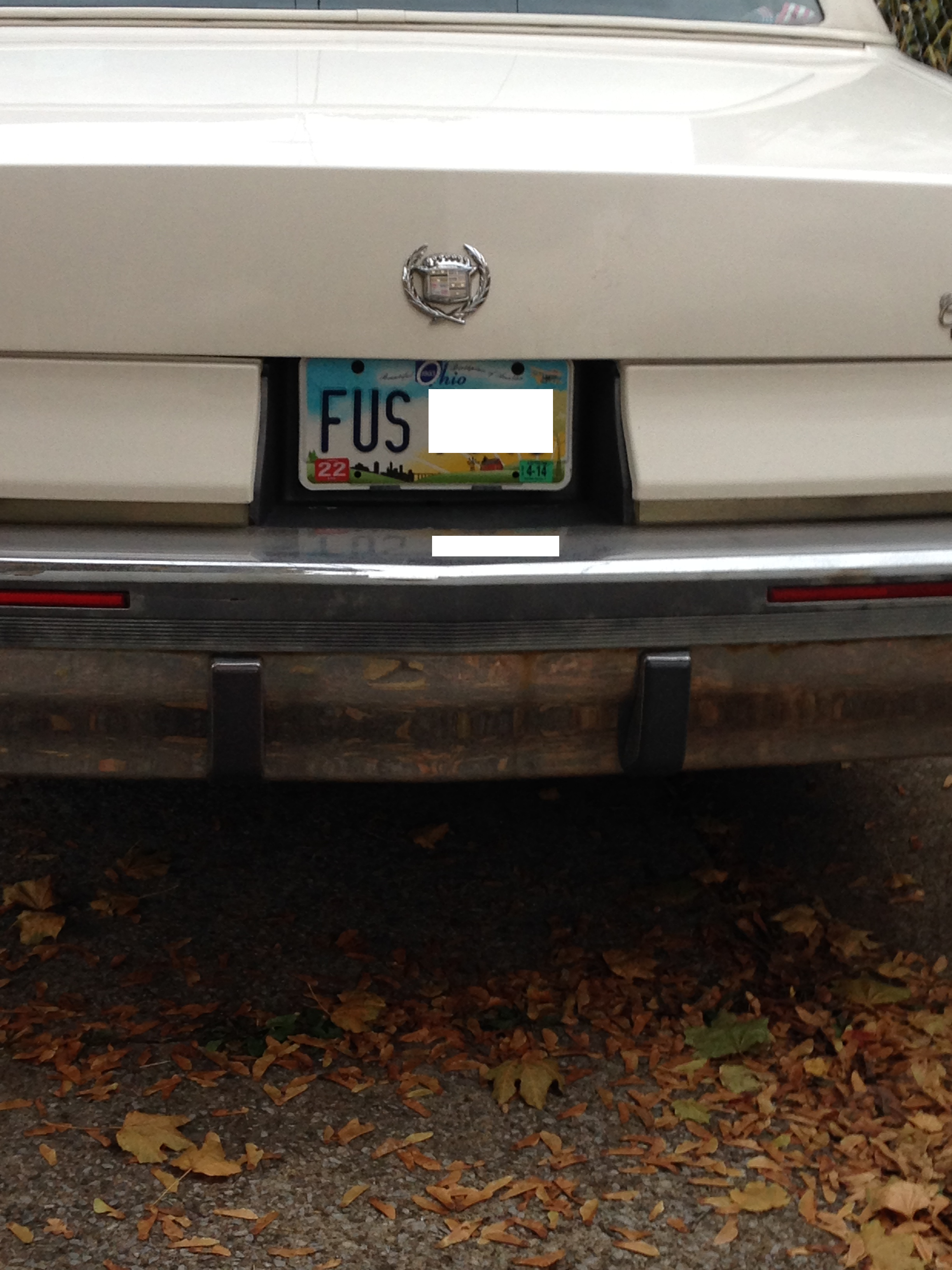 The letters F, U, and S always jump out at me when I see them together in that order.  FUS will always stand for my alma mater Franciscan University of Steubenville.  I’ve never experienced Catholicism and spirituality anywhere to the extent it is present at FUS. I was blessed to grow up in the same town as that institution.  I failed to notice the license plate letters the morning before.  I was too preoccupied with the bible sitting on the trunk of that white Cadillac.  Seeing the FUS license plate the next day was somewhat of a double “coincidence.”

I think it was later that Tuesday morning that the morning show on Annunciation Radio broadcast a brief segment on dealing with worry and stress in our lives.  The host observed how we often forget to turn those worries over to God.  I think it was Tuesday and Wednesday that my week-load seemed to get a little bit lighter. That can’t be coincidence, can it?