Every year around this time of year, along with the Thanksgiving and Christmas holidays, comes the popular topic of whether stores and restaurants and the like should be open on Thanksgiving Day. I am not going to delve into that topic specifically, but it was something I heard debated once again on talk radio recently. The point of view being aired was that other than necessary services (and God Bless all those who have to give up family time to protect, serve, and give care to others) there is no reason why people need to be out and about shopping on Thanksgiving when Black Friday is only a few hours away.

While I don’t have one of those service jobs and I do typically get a four day Thanksgiving weekend, over the past several years I’ve noticed that there always seems to be either a unexpected figurative fire to be put out or some other demanding deadline looming at my day job always smack dab on and around the Thanksgiving holiday.  Sometimes it is right before, sometimes it falls just after.  Sometimes it impacts my ability to have a relaxing four days with my spouse and kids. So while I don’t have to be at my desk at work on turkey day, I often find myself bringing work home over that period.

2016 proved to be no exception as an important deadline reared its ugly head and my attempt at meeting it early on was quite unsuccessful.  This was one of those kind of deadlines! You know the type… where your ability to meet your end is impacted by how quickly or efficiently someone else handles their own deadline and gets usable and manageable information to you (that you then need to re-work for several hours to several days into a different acceptable format which is not as simple as printing, signing, and submitting).  I actually brought work home with me over the weekend prior to Thanksgiving, but could not get much accomplished on it without the initial groundwork I was relying upon and still waiting for from another source.

The Monday prior to Thanksgiving arrived and I went into work about 90 minutes early. Believe me when I say that it would have been even earlier than that, but 90 minutes is about as early as I can make it due to my daughter drop off duties during the school year. Once I got to the office, a good part of Monday morning was spent fighting with computer files from a recent email containing volumes of documents 90+% of which were in an unrecognized file format which I could not access.  As that proved unfruitful — even the sender of the email was at a loss, I opted to work on the stuff that I could access and assimilate into my part of the process — piecemeal as it may be.

I was twice interrupted (not rudely by any means and I tried very hard to be sympathetic and helpful) by a tenant with sewage coming in through his bathroom drains with no clue how to diagnose or fix the issue.  I am no plumber and don’t have the authority to make that call, but my efforts to reach the owner — tied up out of town in a meeting — were eventually responded to with a text message that someone was coming to get the key to get into another vacant adjacent apartment unit.

Making little progress on my computer files issue and having lost the morning to the afternoon, I quickly realized that I was fighting a losing battle. Playing telephone and email tag with the guy on the other end of those uncrackable documents and waiting for the apartment “key master” (who never arrived) — I had my own out of town appearance scheduled for 3:30 at a location 30 minutes away. So I left the computer files, I left the unclaimed apartment key, and I left the sewage stained apartment all behind.  I drove 30 minutes to the next county, checked in for my 3:30 appearance and I waited, and waited, and then I waited some more. Finally at 3:50, when the other side didn’t show up, I checked out and started my drive back – the time all wasted.  It was ironic because I knew in just 2½ short hours later I would find myself driving right back to almost the exact same location with my wife and daughter for an evening appointment.  By this time I literally felt like Dorothy in a whirlwind tornado and I definitely was not in Kansas anymore.

On Tuesday of that week, I planned to go into the office early again. I usually do not shower until after I take our daughter to school – giving me sole access to the single bathroom in our house. But on this day, I planned to shower early. I was fully prepared to jump in at 6:00, but I missed my mark when my wife had a brief emergency need for the bathroom.  Since her workday regularly starts at 6:30, she has bathroom priority at that time of the morning. Rather than get in right away after her, I directed my attention to my work issues on my laptop. After another 40 minutes passed by and my wife was already gone to work, I tried my shower again.

As is my habit, I turned the bathroom radio on while starting up the shower.  Usually it is just background noise that I can’t always hear clearly while under the running shower head. But I am sometimes able to hear the news or the teaser naming an upcoming studio guest interview. I thought I heard a particular name mentioned that morning, but I wasn’t really sure. The combination of the shower head water noise and the weak reception of AM radio in the wintertime made it very difficult to know for sure. A few minutes later, I heard a familiar piano riff leading in to the studio interview and then knew for sure that I’d heard correctly.

Jim Brickman was coming to Cleveland for his 2016 Comfort and Joy Christmas concert tour and I was able to finish my shower and hear the end of his interview to learn that after Cleveland, he was finishing up the tour on December 23rd in Sandusky.  Had I taken my 6:00 shower, I would not have caught the radio interview and probably would have missed the announcement altogether.  But that simple delay and my decision to do some work rather than jump in at 6:05 gave me the opportunity to hear this interview and act on it – one major Christmas gift down!  Three tickets later (and an additional early Christmas surprise for my wife* – see below) we solidified our plans for the Friday before Christmas.

Always a good show, Jim’s focus on Christmas music was extra special and made for an all around fun evening with the family — one that I might have missed if it wasn’t for some work stress over the Thanksgiving holiday. Great music along with Anne Cochran, Tracy Silverman, and Kris Allen.

I am so thankful and thank God every day for the family he has given to me. I don’t believe it to be coincidence that we were able to share this evening together last night on (as Jim put it) Christmas Eve … Eve. 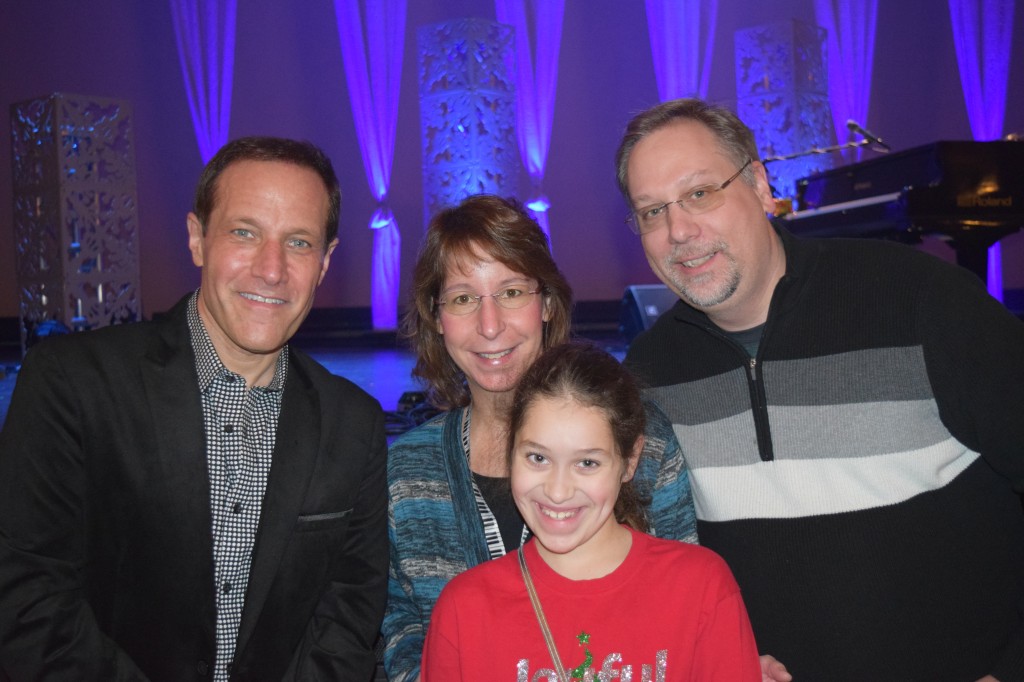 * We got to meet with Jim briefly before the concert courtesy of the surprise VIP membership gift I got for my wife!