When I started this blog in 2008, I envisioned it would be a place where I shared my ongoing  experiences that there are No Coincidences with God (which I later referred to as “God-Incidences” after hearing that term from a friend).  I’d had quite a few of these experiences prior to initiating the blog — some more profound than others.  But as it turned out, I failed to keep my eyes open and keep myself as aware as I could have.  I still believe that God-Incidences happen to each of us every single day — there are just so many that slip by while we remain oblivious – our attention focused on other worries and concerns.  I found myself no longer tuning in to my own God-Incidences on a regular basis, so my blog posts ended rather abruptly in the summer of 2009.

That, coupled with a really poor blogging interface on my server, kept me from making the regular posts that I had originally hoped for.  In retrospect, I probably shouldn’t have limited my comments to only those times when I recognized a profound God-Incident.  God-Incidences are only one small part of sharing the presence of God the Father, Jesus the Son, and the Holy Spirit.

After setting up a new blogging interface and porting over the older stuff, I’ve decided to expand my focus.  Utilizing blog categories, I can still showcase the God-Incidences as they filter in among the other events and occurrences which are equally strong testaments to His presence in my life and in our world.  Truthfully speaking, this blog is probably more for my own spiritual growth and reflection — something that I sometimes overlook in the daily grind and often fail to work on the way that I should — than it is for anyone who accidentally stumbles across this site.  If I generate any followers along the way who get any sort of inspiration from my observations, that is just icing on the proverbial cake.

I hope to resume this blog and post on a more consistent basis.  I plan to expand beyond God-Incidences, but still keep it tied to my personal awareness and relationship with Father, Son, & Spirit.  I don’t intend to write about the mundane experiences of everyday life just to get in regular updates.  I have to hold something back for Facebook and Twitter!

So as I explained it above, I felt compelled to write about my date earlier this month. . .

A few weeks ago, I went on a “date” with my four year old daughter.  I had nothing planned other than getting something to eat and then ‘killing some time’ while her mother hosted her group of bible study ladies at our house on that particular week.  Because our house is very small with only one central area that the other rooms all extend from, an active and talkative four year old can be a pretty significant distraction when she feels that she must “perform” in front of any house guests.  So I’ve been blessed with the opportunity to take her on mini-dates every few weeks for a couple of hours when the bible study rotation comes to our home.

On this particular day, I just decided to let it happen as it happened.  After eating dinner, without a plan — I found myself just driving down the road with my backseat chatterbox interrogating me on what we were going to do on our date.  We ended up near the location where I asked her mom to marry me.

Sheldon’s Marsh is a small wildlife preserve in Huron, Ohio and a great place to walk with only your thoughts to keep you occupied.  I have yet to go there and not experience God in all His Glory in the beauty of His creation.  We decided to go there for a nature walk date.  This time, I had much more than my thoughts to keep me occupied — I had a little chatterbox that barely stopped to take a breath the entire time.  At one point I even asked her if she had a string in her back and politely suggested that she stop pulling it.  Of course the reference completely escaped her, but she still thought it was quite funny that I suggest she had a pull string in her back.

I didn’t experience a specific God-Incidence at the time, but I had a wonderful time with an inquisitive four year old sharing a Daddy-Daughter moment.  Her amazement at the frogs, turtles, birds, and dragonflies was such a fresh look at the beautiful things God gave us to delight our senses.  The sights, sounds, and smells were such a relaxing break from the struggles temporarily left behind.

Now I suppose I could force a God-Incidence to this story if I felt I really had to.  It wasn’t a God-Incident of that particular moment, but actually one of nearly seven years ago.  My wife and I had no reason to know at the time that the very day I chose to propose in September of 2004 at Sheldon Marsh would be exactly two years before our daughter’s birth.  I was able to share that God-Incidence with my daughter on our “date” — that mommy and daddy got engaged on her birthday in the very spot where we were then standing.  She didn’t quite grasp the significance.  Instead, I think it just got her thinking about the fact that she has a birthday coming up!

I hope she had fun on our date.  I know that I certainly did!

Since my younger daughter was the focus of this post, I would be remiss if I did not plug her Words of Wisdom pages that always get a chuckle out of me.  In the few years that this blog was on hiatus, I’ve tracked some of her quips and giggles to share on that site.  Two of her more recent comments (Talk to the Animals and Thunkin Thunkin) came straight from our date at Sheldon’s Marsh.  The photos below also came from our date.  Unfortunately, my cell phone camera doesn’t have zoom capability, so this was the best I was able to get.  These are two of the frogs and one of the cranes that we saw on our date.  They are each roughly centered in the respective frames. 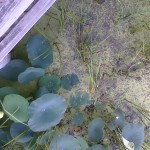 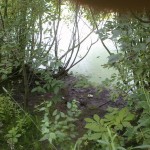